The Hamer HM30 is a compact FFS line that has been especially designed for the medical and pharmaceutical industry and is suitable for clean room environment.

The HM30 is a modular frame design, built in steel, welded and painted with protective paint. The Index system is driven by a 1.5 kW motor controlled by a frequency inverter and one encoder. The chain punches the material from the top so dust cannot fall into the film.

The heating station has an upper heater with infrared resistances and a regulation system of shutters built in stainless steel enabling adjusting of the heating area according to the forming index. The length of the heater is two times the maximum index of the machine, with several heating clusters, each individually adjustable.

Resistances are ceramic and wiring going through stainless steel wireways to ensure they are maintenance free.

Total installed power in the heater is 8 kW.

Thermoforming action is done by vacuum assisted with air pressure (up to 2 bars). Forming is always below the material line, being maximum forming depth 60 mm. Forming platens have a closing force og 18.5 kN. Lower platen is motioned by a vertical pneumatic cylinder in combination by a mechanical toggle system. Upper platen is motioned by a direct cylinder. Both platens run independently. Clamping frames are motioned by their own pneumatic cylinders.

This design allows processing of thick forming materials (up to 8 mm).

The thermoforming process forces heated material against a mould to produce the desired shape. The forming cycle begins by sealing the clamped preheated film to the mould and applying a moderate vacuum action. Then, while the sheet is still within the proper forming temperature range, strong vacuum action combined with air pressure is applied to form the sheet onto or into the mould. Once formed, vacuum action is reverted and air is blown to separate the material from the mould.

This forming process is usually used in combination with plug-assist forming. This technique distributes the material more evenly over the mould thus achieving deeper draws.

Sealing of the lidding material is accomplished by applying pressure and temperature in the sealing press. The lower platen is driven by a membrane pneumatic cylinder to move the platen in the vertical direction with a maximum closing force of 29 kN.

The upper platen remains static and tilts over itself to replace the tooling.

The sealing press is provided with a pressure switch that reads the pressure applied and triggers an alarm in case sealing pressure differs from the preset value.

The sealing tool placed in the upper platen is heated. A probe built into the sealing plate reads the actual sealing temperature and makes sure it remains constant through each cycle.

Sealed packages are trimmed from the web with steel rule die.

The lower platen is driven by a pneumatic cylinder assisted with a mechanical toggle system which multiplies the closing force. The upper platen remains static and the position is manually adjusted by a system of spindles.

To increase efficiency of cutting the cutting edge is heated by a contact heating plate.

Formed packages are discharged by suction cups and then placed onto a conveyor belt. 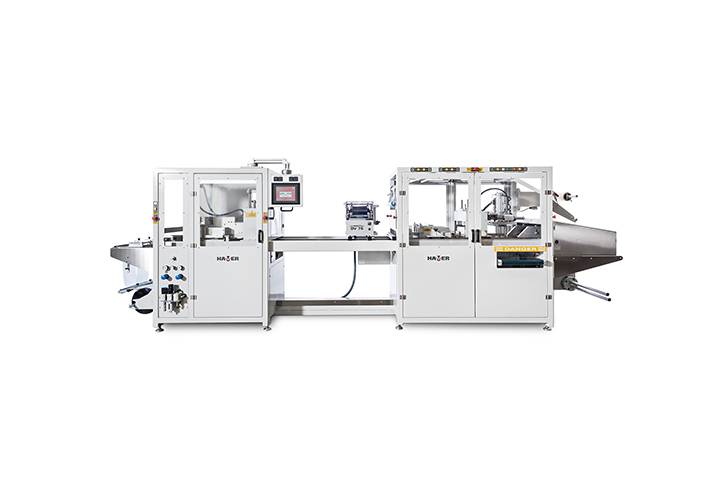 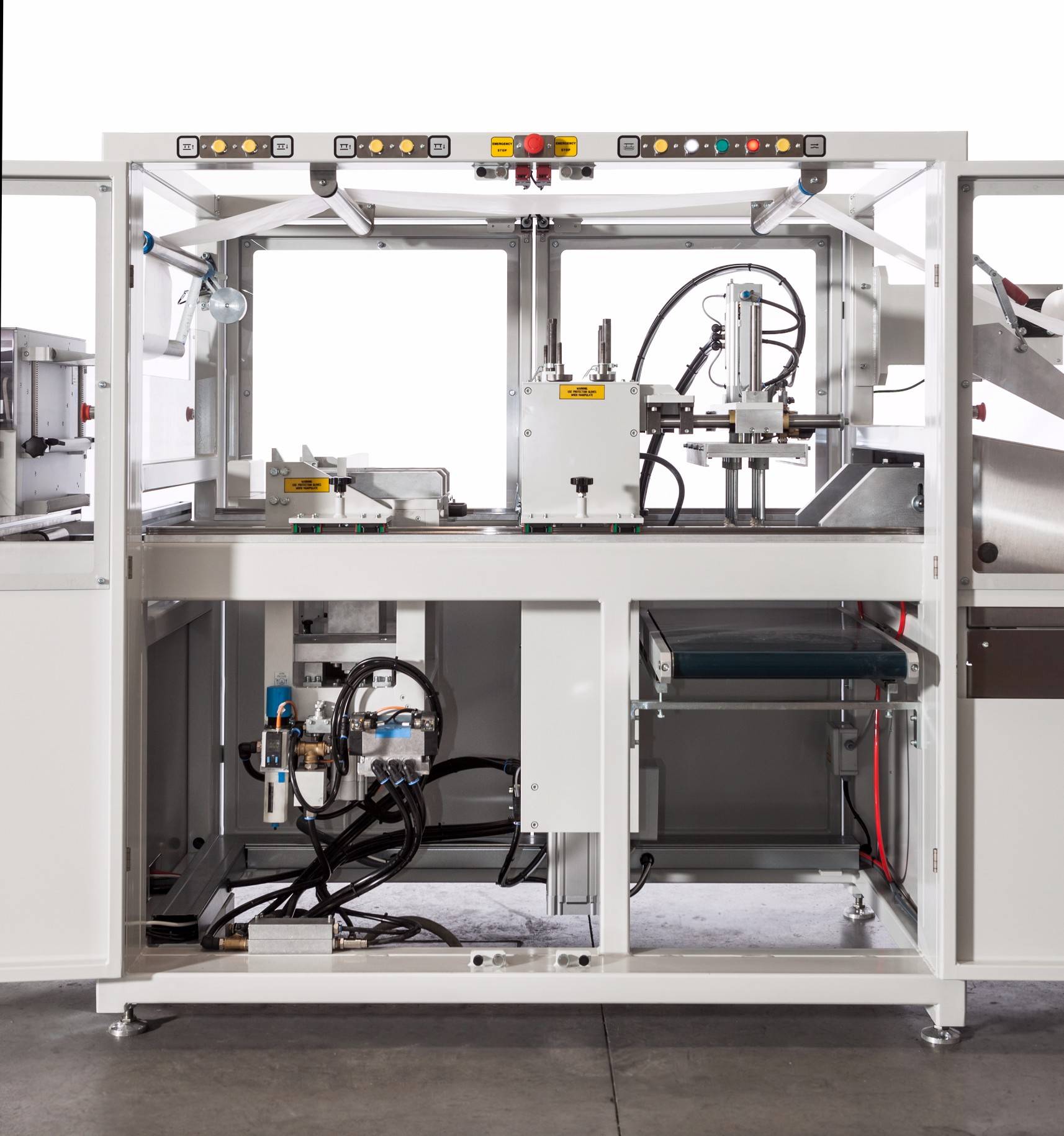 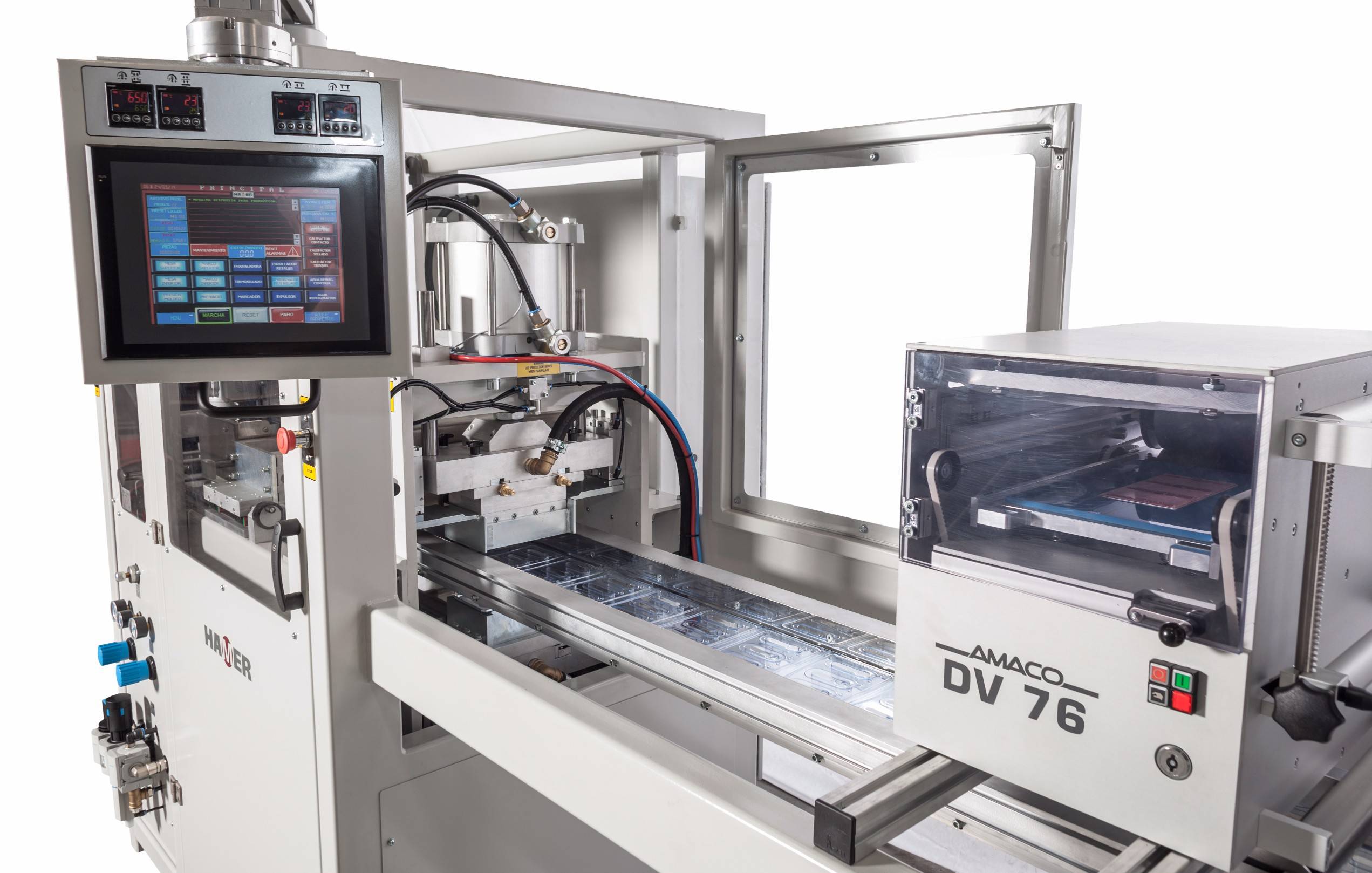 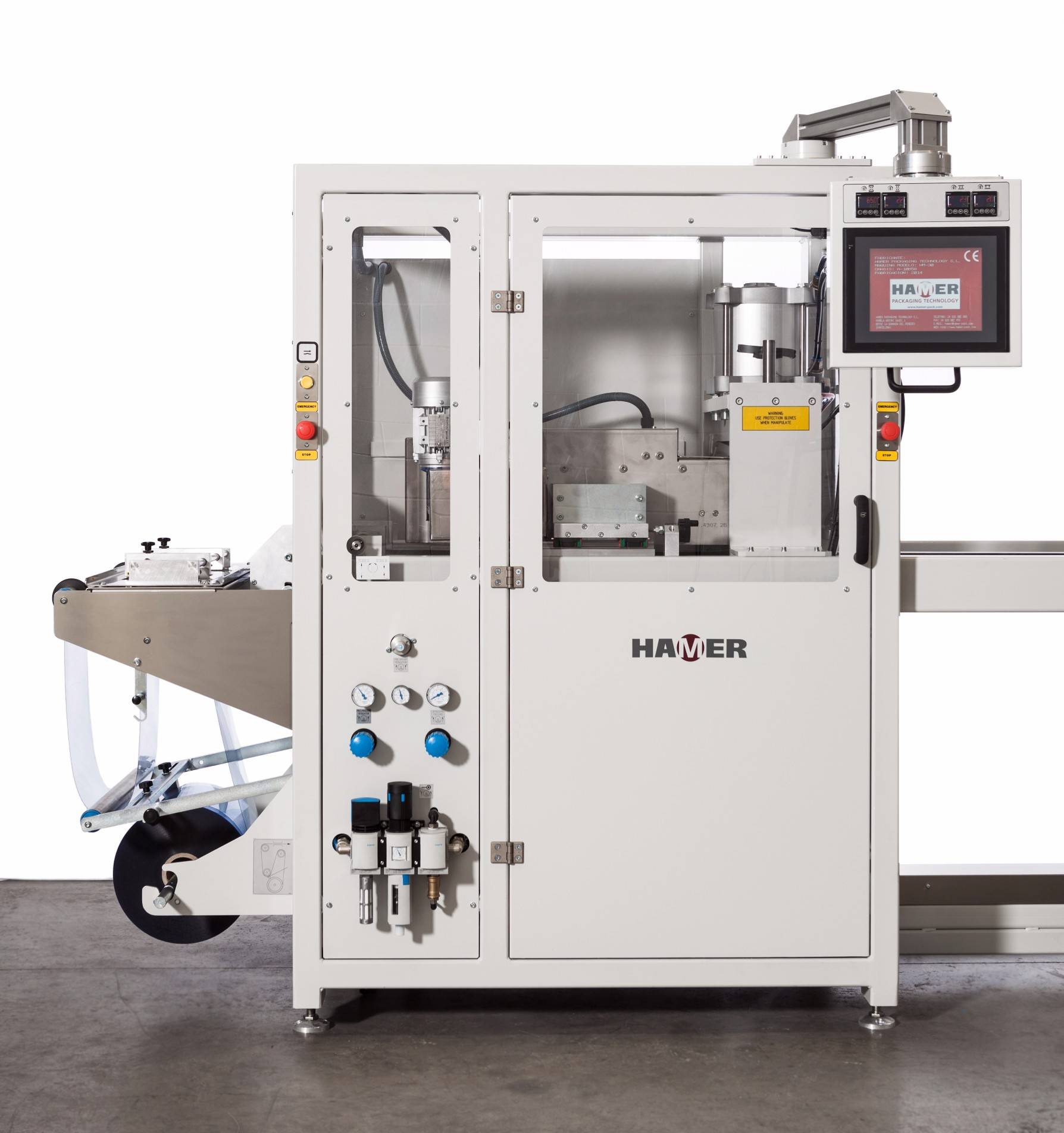